Lilyan’s pattern of waxing and waning fever has continued pretty much the same. After her fever yesterday afternoon during her visit with five of her siblings, we expected the next one around 10:00 pm or so.

Here is a picture of her during her non-fever time yesterday. We’re so, so thankful that she gets these breaks for several hours each day, but it sure makes us long to see her healthy all the time again.

Her next bout with fever didn’t happen until 11:30 pm, but it did happen. I was already in such a dead sleep that I never even knew about it until Scott told me when we were both awake later at around 4:00 am. I somehow slept through her alarms as her heart rate and respiration increased. And through Scott getting up to help the nurse turn her and get her temperature, which was back up to about 103º again. And through him standing by her side until things began to settle down enough that she could fall back to sleep. I think this has only happened to me two or three times during all of the years of our kids’ hospitalizations and surgeries. I usually can’t sleep through anything that involves their care or problems with their healing, and when I do, it always means I’ve reached a serious level of sleep deprivation. I’m so thankful that we are both able to be here to spell each other and take turns caring for her when needed. It’s also very, very helpful to have two sets of ears as we try to make our over-tired brains process the details they give to us as they try to figure out what is going on with our girl. This isn’t a blessing that all families have, and we never, ever take this gift for granted.

This morning, I started the day trying to figure out how to get all of her hair out of the way for her surgery today without using anything metal, which isn’t allowed. It took a little creativity and a combination of ponytails, braiding, twisting, and wrapping, but we  did it!

At about 12:30, the OR called our nurse to tell her they would be coming for Lilyan soon. Unfortunately, this was also right when she began having chills and increased heart rate, and sure enough, her fever went to 103º again before they got here for her. Her headache was so bad that she was in tears, and because of this, she was very emotional again about having to go back to surgery. Thankfully, her IV Versed worked wonders again, and things went very smoothly as we kissed her and handed her off at the OR doors. 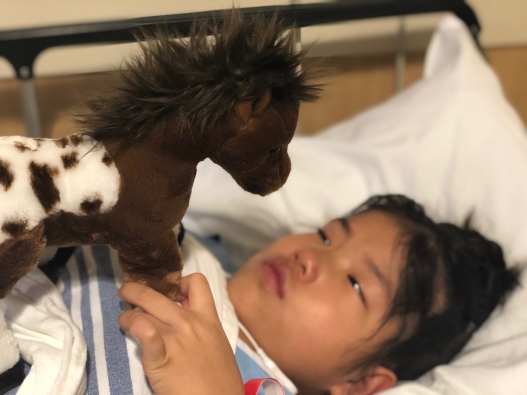 Lilyan chose her pony, Max, to go to surgery with her today. He was very happy to be her escort this time. She looked into his face and tried to hold back the tears as she waited for her Versed.

Surgery took just over an hour, and we were called back to Recovery to be with Lilyan before she even woke up. This was much better than on Tuesday when, somehow, her Recovery nurse didn’t get the message that we needed to be there with her as soon as she began to come around. She was distraught, in tears, and in a bit of a panic when they finally called us back to be with her. This is so, so important for kids from backgrounds of trauma. We are her source of safety in situations of uncertainty and/or fear. Frankly, I think this is true of all kids — even those born into stable homes. It’s something that I believe hospitals need to understand better.

Still sleeping peacefully, snuggled with Max, when we got to her after her surgery

We were back in her room by about 3:00 pm, where a post card had been delivered for Lilyan and was waiting on her pillow. She was super excited to get some actual mail. She also loved her e-card that another friend sent her earlier this week. 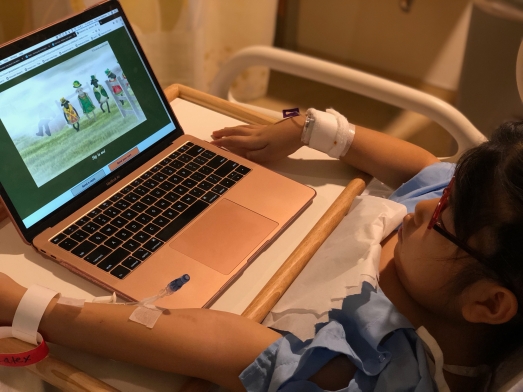 Surprise mail on her pillow — such beautiful timing for its arrival 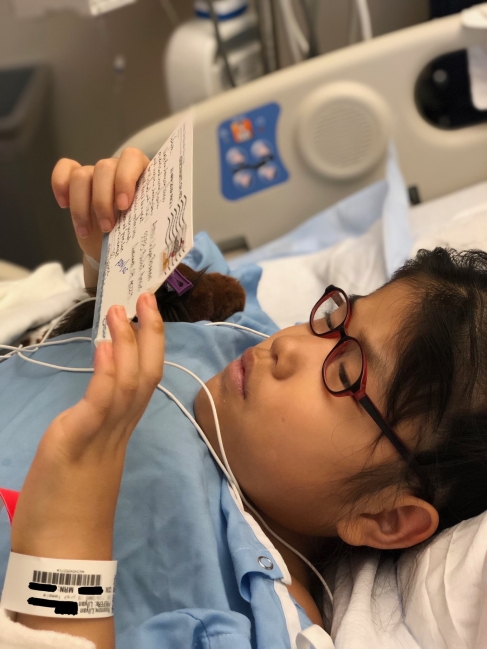 After we got settled back into our room on A-3N, one of the plastic surgery doctors came to talk to us. She said things looked pretty much the same as they had on Tuesday, and that in spite of that clean-out, they felt the ‘murkiness” of the fluid in her wound indicated that there is still active infection there. They are going to take her back to surgery again on Sunday to clean her out again. We are very thankful to have what we all think might be an explanation for the continued fevers, but this was really, really discouraging news. It’s also discouraging that no one can be certain that this is definitely the source of her recurring fevers. It’s hard not to have definite answers.

Now, we just have no idea how long we will be here, and that uncertainty is so hard for Lilyan and very, very hard for some of our kids at home — especially Kathryn. It just seems like there is no end in sight.

Please continue to pray for healing and that we will be able to go home. Scott and I start to face the making of a difficult decision when we get this far into a hospital stay and have no clear idea how much longer it will be. We both do our best to stay here whenever our kids are admitted for anything difficult. As I said above, this is a blessing as it allows us to spell each other, and helps as we both try to process all of the info coming at us and make decisions together.

Another reason we both usually stay here full-time is that Kathryn has a terrible time if either of us comes and goes. Every time she has to tell one of us goodbye, she loses even more ground emotionally, and that extra stress puts her at higher risk for seizures. She actually does better if we both just stay gone for a stretch of days. On the other hand, there does come a time when they all, including her, need to have at least one of us back at home with them. This is especially true when we can’t give them a clear idea of how long this separation is going to last, and it means that we have to carefully weigh the pros and cons, the needs of each child, the risks for Kathryn, the in-patient child’s status, etc., and make the best decision we can for all involved. We will be facing the making of this decision if we are still here next week.

Also, we have meals for the kids up through Monday. If we are here longer than that, we may need some more help with meals for our army at home. Thank you so much to all who keep asking us to let you know how you can help. We will keep you posted.

2 thoughts on “Third Surgery is Behind Us”