I’m writing this update from beside our daughter’s hospital bed. Not Lilyan’s. Roslyn’s. Not at all what we had planned.

While I’m here with Roslyn, Scott is trying to get back home where Lilyan’s wound VAC alarm is going off, alerting us to a leak, which needs to be addressed asap. He is stuck in stand-still traffic on I-75.

Healing is happening, but it’s still very slow and there is still no hint that the end of this is coming anytime soon.

Now, back to Roslyn. Both Roslyn (who has spina bifida) and Kathryn (who has cerebral palsy) developed UTI’s over the past couple of weeks. In fact, Kathryn has had three UTI’s during the almost-three-months we have been caring for Lilyan. After their terrible bladder challenges and huge bladder reconstruction surgeries back in 2016 and 2017, and then their recoveries, and finally since their return to health around the end of 2017 and beginning of 2018, both Roslyn and Kathryn have been doing great. Until now. We are still a little uncertain about what’s causing Kathryn’s infections to return, but we understand some of what’s causing Roslyn’s trouble.

If you’ve heard or read anything about the antibiotic resistance crisis, then you’ll understand why we are really worried to learn that Roslyn has developed a pretty significant resistance to antibiotics. We learned about this last week as they were trying to figure out how to treat her current UTI. We also scheduled an appointment with Lilyan’s Infectious Diseases doctor so that he could meet Roslyn, help us better understand what all of this means, and become involved in the future treatment of her infections. That appointment is scheduled for June 17. We hope to understand all of this better after that appointment.

Unfortunately, when Roslyn woke up yesterday (Sunday) morning, it became clear that her body wasn’t responding to the antibiotic they were trying, and within a few hours, it was also clear that the infection had moved to her kidneys. She was a very sick little girl and getting sicker before our eyes. So we brought her into the ER late yesterday afternoon. There, the Urology Department, Emergency Department, and the Infectious Diseases Department all worked really well together and got her started on an IV antibiotic that everyone thought she would do well with. 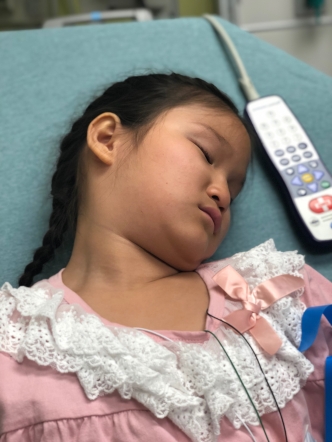 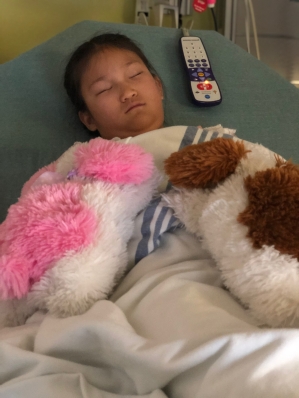 We had a bad night here at the hospital as her fever really didn’t want to come down and as her Foley catheter continually clogged, keeping her bladder from draining.

But the good news is that she is definitely some better today (although her fever is climbing again as I type this), which seems to mean that we have found an antibiotic that will work for her this time. It may not work next time, but it seems to be working this time. There is an oral form of this same drug, so we are hoping we won’t be here very many days before they will let us go home and continue treatment there — if she keeps responding well. 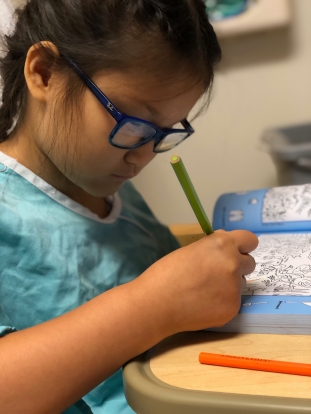 Friends have rallied, again, and are feeding our kids back home, and we have a plan in place that will allow us to be with Lilyan for her surgery on Wednesday if Roslyn is still in the hospital as we expect her to be. Friends and family are SUCH gifts!

In the middle of all of this craziness, our 21-year-old son, Colin, was also diagnosed with a pretty serious seizure disorder. Colin was born in Bolivia at only twenty-six weeks, and miraculously survived, but lost his vision. His latest testing showed seizure activity in multiple portions of his brain. Our neurosurgeon felt that he has probably been having seizures for years, and that they are probably (although we’ll never know for sure) a result of his very premature birth. Unfortunately, we didn’t catch any outward signs of seizures in past years. I have moved through a whole range of emotions in processing this information, and I have wrestled with a lot of mom-guilt that we must’ve missed things we should’ve picked up on. Mom-guilt is a real thing. Whether it’s valid or invalid, it’s real. But we can’t go back. We can only move forward. I’m mostly at peace with this now.

While we were in ICU with Lilyan back in March, Colin had some very obvious seizures, and that’s what prompted this search for answers. He is on medication now and we began almost immediately seeing improvement. We are beginning to feel some excitement about how his life and ability to function will probably improve now that this has been discovered and is being treated. 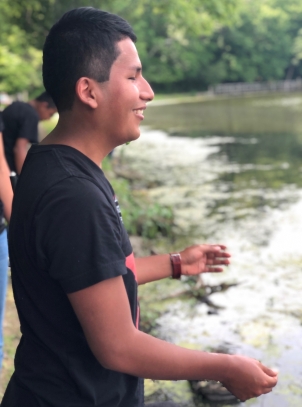 Colin on our most recent family hike in the woods, after starting on anti-seizure medications. He was more animated and interactive than we’ve seen him in quite awhile.

But all of this has been really hard, and there are a number of other challenges that I’m not even going to take time to go into here. We pray for rest and a break, and we wake up to new “trouble and pain” day after day.

Yesterday (Sunday) morning, as we were watching Roslyn and trying to determine if we needed to take her to the hospital, we went ahead with our planned family service. The topic was God’s sustaining grace, and it was just what we needed to hear to prepare us for a trip to the ER a couple of hours later, ending with another unexpected hospital admission.

I texted our older kids to let them know we were headed to the ER with Roslyn and said, “You reach a point where you just know you can’t take anymore and then something happens that you’re sure you can’t cope with. But you don’t have a choice, so you just do. How long will that work? We had our little family service this morning as we were watching Roslyn and trying to decide what to do. It was on sustaining grace. We are crying out for that right now and I know that’s the only thing keeping us going anyway.”

During that home service, Scott drew heavily from a post from John Piper’s Desiring God blog. I’d like to share a little of what Mr. Piper had to say:

I wrote a four-line poem called ‘What Is Sustaining Grace?’ Here’s its definition in four lines.

Not grace to bar what is not bliss,
Nor flight from all distress,
But this, the grace that orders our trouble and pain,
And then in the darkness is there to sustain.

That’s what I mean by sustaining grace. If I were to define grace for you as that which bars what is not bliss, that which is flight from all distress, or that which can’t possibly order your trouble and pain, I would be a liar. I would be unbiblical, and I would be out of sync with real life and real experience. It’s just unbiblical to think about mighty, sovereign grace in that way.

[About] Paul in 2 Corinthians 12. Remember the thorn in the flesh? We don’t know what it was, but it was thorny. It was painful, and so he cried out, ‘God, take it away! God, take it away! God, take it away!’ Three times he cries out, and three times the answer comes back, ‘No, no, no.’ Then Paul gets it, because of the reason that Jesus gives him: ‘My grace, my sustaining grace, is sufficient for you, for my power is made perfect in weakness’ (2 Corinthians 12:9). Paul relents, and he says, ‘Therefore I will boast all the more gladly about my weaknesses, so that Christ’s power may rest on me. That is why, for Christ’s sake, I delight in weaknesses, in insults, in hardships, in persecutions, in difficulties. For when I am weak, then I am strong’ (2 Corinthians 12:9–10).

It is not grace to bar what is not bliss nor flight from all distress. It’s the grace that orders our thorns in the flesh. . .  It’s the grace in the darkness that’s there to sustain.

There’s no question in our minds that we are in a dark place right now. There are so many puddles of sunshine that pop up here and there, but overall, it’s a dark time. And the reminder that we have this promise of “grace in the darkness that’s there to sustain,” was what we needed to get us through these next unpleasant surprises waiting for us.

We are holding onto that.

8 thoughts on “Grace That Orders Our Trouble and Pain”