So although it didn’t go exactly like we had hoped, we did get home for part of Easter weekend. The very beginning was super bumpy, and we were way, way too tired to cope with it well. It went like this:

We didn’t manage to finally arrive home Friday until about 6:30 that evening, and within about fifteen minutes, Lilyan was running fever again. We came through the door, kissed the tops of all our little ones’ heads, said quick hellos to the older ones, tried to assess Lilyan’s condition,  and then our home nurse was at the door for our final PICC line refresher course.

The fever continued to climb a bit, and at that point, our fatigue was so great that we just couldn’t bear the thought of having to take her back in to the hospital again immediately.

The good news was that we had a nurse in the house so they allowed her to just assess things there and determine that Lilyan’s back wound and her PICC line were both fine.

The bad news is that all of this took hours, and this very kind and patient nurse didn’t leave our house until close to 9:30. So we never really even got to talk to our kids at all that night, and we were up until close to 1:00 am getting Lilyan all settled and completing her final antibiotic dose, which had to be done through her PICC line.

In the middle of the disappointment that we had completely lost our first evening as a family, and the mental and emotional fog resulting from our fatigue, the world felt very black and the future looked really hopeless. I remember my weary, cloudy brain processing on some level that I shouldn’t pay too much attention to those feelings under the circumstances, but when we finally fell into bed and drifted off to sleep, I didn’t see how I could muster the energy to do one more day. And especially not with an upbeat attitude for our watching weary and needy kids.

But that was Friday. Lilyan’s fever went down that night and stayed down all through Saturday.

And Saturday was a wonderful day filled with healing and laughing and hugs and connection and fun.

I’ll wait and let the pictures below tell that story more fully in a minute, but we ended that night with pizza and a movie – “Christopher Robin,” starring Ewan McGregor. At one point near the end of the movie, Winnie the Pooh and Christopher Robin have a little conversation. That’s where my opening quote is from. And it struck me, during those lines of the movie, that this was exactly how I had felt on Friday — before Saturday had become today. It was just too much for me, but I had no idea what a wonderful day was waiting for us once Saturday became today.

And then I thought about Jesus’s disciples as they moved through that sad weekend after their dear friend — their Lord — had been so brutally killed. The future was just too much to even think about because they didn’t understand how the whole world was about to change when Sunday came. And it all seemed, somehow, so poignant to me in that moment. In front of our TV. Surrounded by my precious, precious family. Listening to Winnie the Pooh speak words of wisdom.

There was no way for me to pull together our typical Easter dinner this year, so, after a warm and intimate Easter worship service in our family room, we chose to use a generous and unexpected gift from dear friends to order Chinese to be delivered to our door.  It’s probably not an Easter dinner we’ll ever forget.

Sadly, as we were eating our dinner, Lilyan complained of a headache and just generally not feeling well. We checked her temperature, which was 103º, quickly repacked our only-partially-unpacked bags, and headed to the Emergency Department at Children’s. We were still very, very tired, and definitely disappointed that our time together had been cut short. But we were also feeling refreshed in spite of still being tired, and the main thing we all kept feeling was thankful. We were all so grateful that we had been able to have those very special times together before having to head back to what is beginning to feel like a home away from home.

After sitting in an exam room in the ER for four and a half hours, they finally admitted us, and there were some familiar faces waiting to greet us on A-3 North.

Once again, Lilyan’s fever came down with Motrin and Tylenol, and stayed down all night. She had surgery the next morning (Monday, April 22). Although everyone expected, after Sunday’s high fever, for things to look a bit yucky inside her back again, it looked surprisingly good. Not good enough to close the wound, but also not bad enough to explain the high fever.

There have been a couple more fevers since then, lots and lots (and LOTS!) of back and forth discussions between the teams caring for her, but the bottom line is this

We will try to post an update after surgery on Thursday. For now, though, the (many) pictures and captions below paint a much better picture of how great our day-and-a-half was at home for Easter weekend.

An exhausted and feverish Lilyan patiently waiting while our kind home nurse cared for her PICC line Friday night when what we all really wanted was to just spend time together. 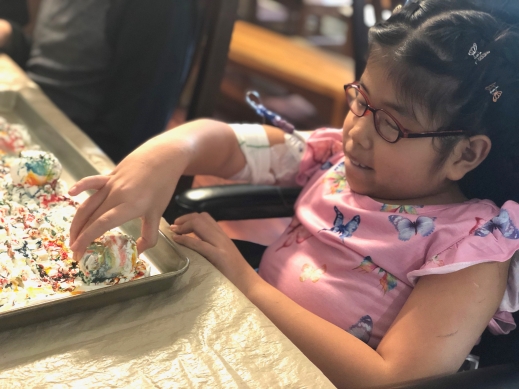 Saturday morning dawned with new hope and energy, and we all enjoyed some egg decorating, using a whole new method that involves Cool Whip and food coloring.

Kathryn was so, so happy to have the whole family together again for awhile 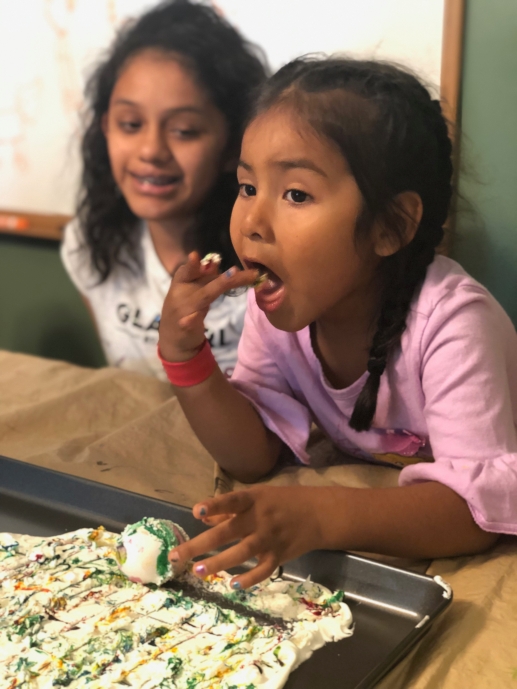 Lots of cute pictures of all of the kids, but I’ll limit it to these few. I thought this one of Nolan was super cute 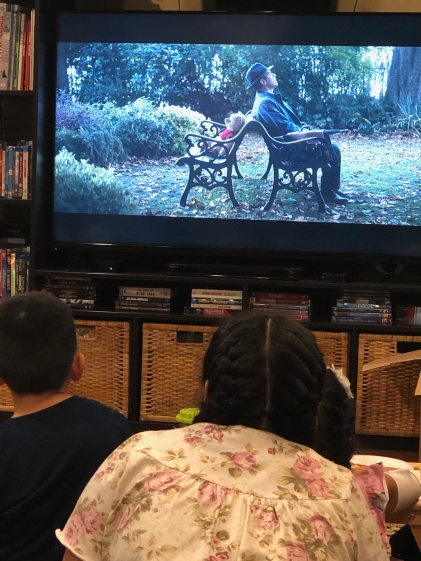 After the younger ones were in bed Saturday night, the older ones helped fill the eggs for hiding the next day, and . . . 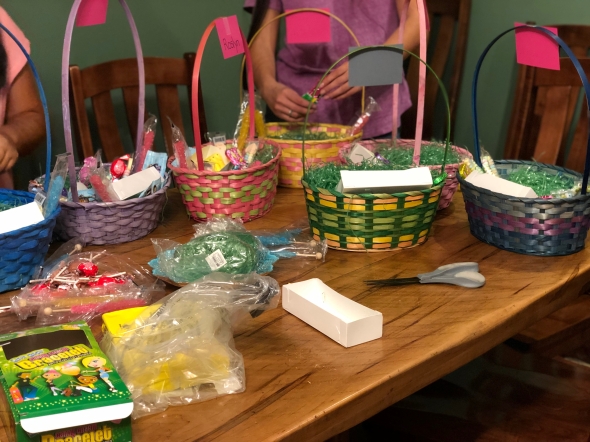 . . . helped us fill baskets for morning 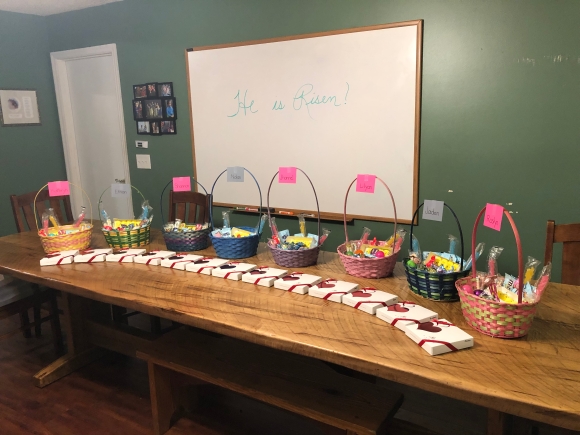 Once ALL of the kids were in bed, Scott and I got the table ready for morning. This included boxes of very special chocolate for our awesome older kids, along with the baskets for the eight youngest 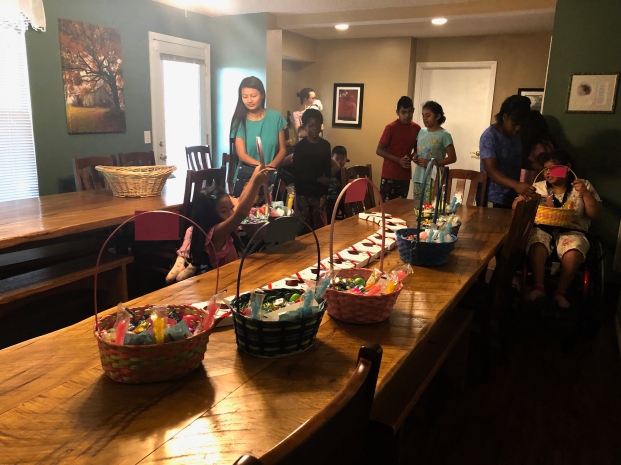 Sunday morning, and here they come! 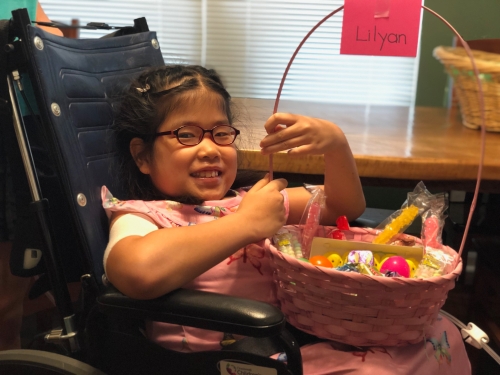 Lilyan was so, so happy to be home for this!

After our home worship service, Lilyan got a good hair-washing, followed by some sister-love from sisters who have missed her so much.

Then it was time for an indoor egg hunt since it was so muddy outside. We learned, from a friend, of this great idea for children in wheelchairs. Helium balloons tied to eggs make it possible for kids in wheelchairs to grab the balloon strings and get their own eggs. Owen and Jaden opted to crawl through the house looking for harder-to-find eggs, but this was great for Kathryn and Lilyan.

Pure chaos reined for awhile as they all hunted for eggs, some of which had been hidden in some pretty creative places by our older kids. 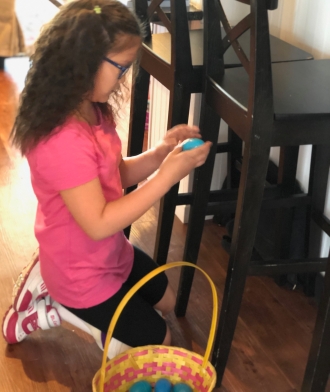 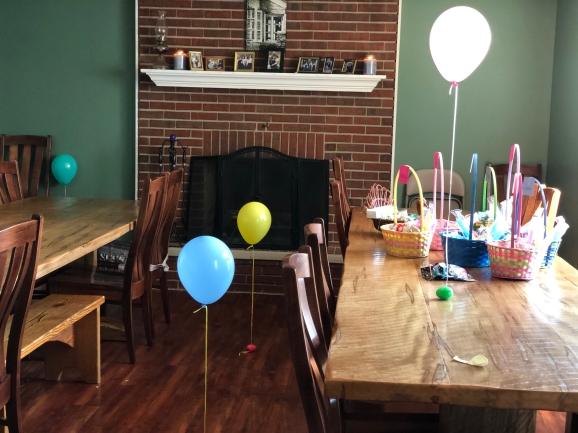 Jhannel had so much fun

Kathryn was so proud of herself when she grabbed her first balloon/egg.

Those guys even hid one inside a balloon! 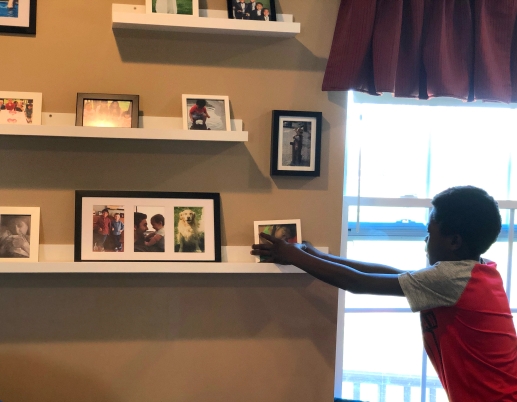 Nolan found one behind a photo

Oh no! Fever! Back to the hospital. 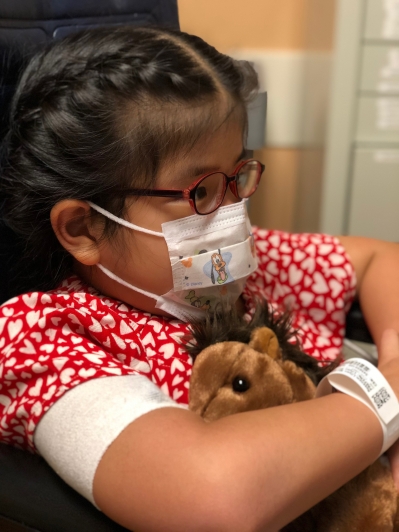