Thankfully, Scott and I both got some periods of deep sleep during the night last night in spite of the constant heavy traffic in Lilyan’s ICU room. (If you missed that update last night, that link is here.) Her nurses were, again, completely committed and beautifully attentive to her needs, even assuring her constantly, for us, that Mommy and Daddy were in the room with her and just sleeping in the parent bed beside her. It’s really important for her to know that we have stayed by her side constantly as we promised. She has continued responding appropriately through her fog of sedation, and has done well with the change in sedation med.

We have been awake now since 4am as some fairly intense consultations have been taking place about the fact that we still have no urine output. They have been able to get her blood pressure up a bit although still not as much as they would like. The concern about giving her Lasix is that it will drop her blood pressure even more again. After much talking over the past couple of hours, they decided we have to try. They gave her a dose of Lasix at 5:40 and have told us that it will probably be a half-hour to an hour before we see anything, positively or negatively, from that. They also increased her BP med (Norepinephrine) a bit as a little pre-Lasix boost to try to help head off any issues. So now everyone is watching her closely.

She opened her eyes very briefly a couple of times this morning and wanted to hold my hand, but she remains mostly peaceful and calm, which we are so, so thankful to see. Outward signs of distress from our babies during time like this always make it much harder on our hearts, so we can’t say enough how glad we are that she appears so peaceful and comfortable. 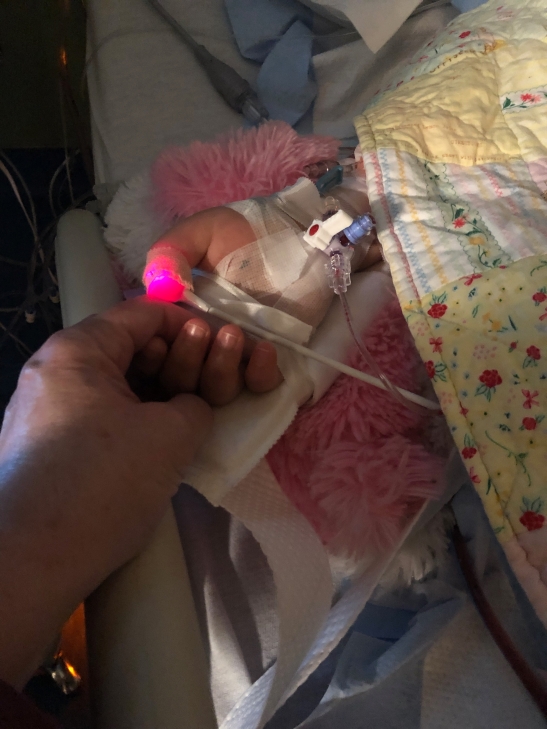 Our prayers now are, obviously, focused on where things go in the next hour. Everyone is really concerned about this lack of output. They are watching kidneys closely through repeated blood draws, and so far, things still look good on that front.

We had another jolt of reality last night about just how serious all of this has been when another of the anesthesia doctors stopped by to talk to us. He was with her through that long night of surgery and remembered our family because he has also taken care of some of our other kids in the past. He was really nice and just said he wanted to make sure we understood just how serious things were that night with her. He said things like, “She was really, really in a lot of trouble,” and, “We had all hands on deck and everybody trying to save her,” and, “She lost so much blood, and we had to give her lots and lots of blood transfusions.” We were super thankful for this info, but for some reason, I felt even more shaken by his report than I had been when it was happening in real time Wednesday night. He was clearly a very calm person and not a sensationalist, and his tone of voice and the genuine concern expressed through his demeanor painted an even more accurate picture of what actually happened. It is so clear that he and the other anesthesiologist who talked to us Wednesday night really thought they were going to lose her — that they didn’t think they were going to be able to get her back. Once again, we are so thankful to have our girl here with us and long to see her completely through this crisis.

Current status of other areas concerning her stability:

Thanks so much for all of the prayers. We’ll keep everyone posted as we are able.

7 thoughts on “Striving for Consistent Stabilization”