Finally. Fourteen hours after they took Lilyan into the OR (at about 9:15am), she arrived in ICU (at about 11:15pm). The last few hours have been emotional and filled with adrenaline.

At about 8:30pm, Scott and I were wondering why we still hadn’t heard from her spine surgeon, because we had been told about two and a half hours earlier that he would be coming out to talk to us “in about two hours.” We both said to each other that we were just wondering if anything had happened; if she might be in any trouble. And we prayed for her.

About an hour later, we learned that at the time we were wondering and praying, she had, indeed, been in trouble.

Around 9:30pm her spine surgeon and the anesthesiologist responsible for all of the neuro-monitoring (a necessary part of making sure they don’t cause further nerve damage in Lilyan’s body during such a delicate surgery) came to talk to us. They told us that she had lost lots and lots of blood, and that around 8:30, her blood pressure had suddenly plummeted and her heart wasn’t “doing its job” and her lungs were struggling and she had gone into respiratory failure. They had to stop the surgery, give her epinephrine to get her heart going again, meds to get her blood pressure back up, and also pump in tons of blood products to try to get her blood volume back up. They had managed to get her stable enough to come talk to us while the plastic surgeon was starting the tough job of closing her up and finishing up the surgery, but they made it clear that she was still seeping blood throughout her body and that she was not “out of the woods” yet.

We were finally able to be with her in ICU a little after midnight, and she is still not out of the woods. It will be at least a couple of days before she is safe. They also stressed that this wasn’t a big surprise — any of it. That these are exactly the things they told us to be prepared for and that they always know are possible with this surgery. They were as ready as possible for this kind of emergency. But the anesthesiologist said to us several times, “It was close. It was really, really close.”

We learned later that she, again, lost a lot of blood as they were frantically trying to get her closed, and that she was very up and down during that period. A team was  fighting hard to keep her alive so that the plastic surgeon could get her closed and out of the OR. One of the big risks over the next couple of days now is that because of all of the blood products they have to give her (platelets and not sure what else), the blood can tend to seep into her lungs so they will have to watch that constantly.

Apparently, keeping her properly intubated is also a challenge because of how badly her body is curved. The tubing tends to kink, so they are keeping her neck in an uncomfortable position to try to prevent this. The swelling is very, very bad, and it’s hard to see her like this, but she is being cared for so gently and lovingly here. 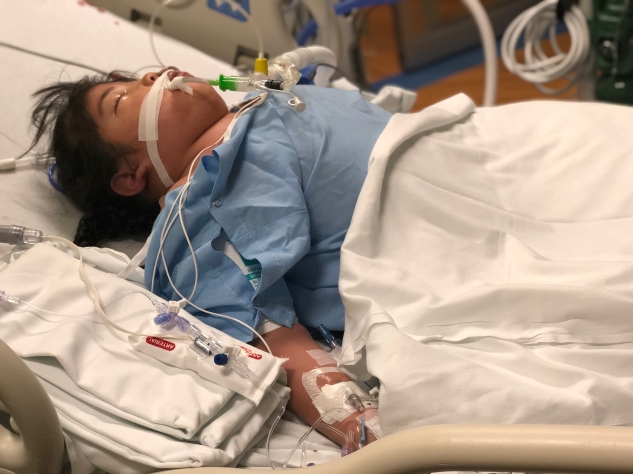 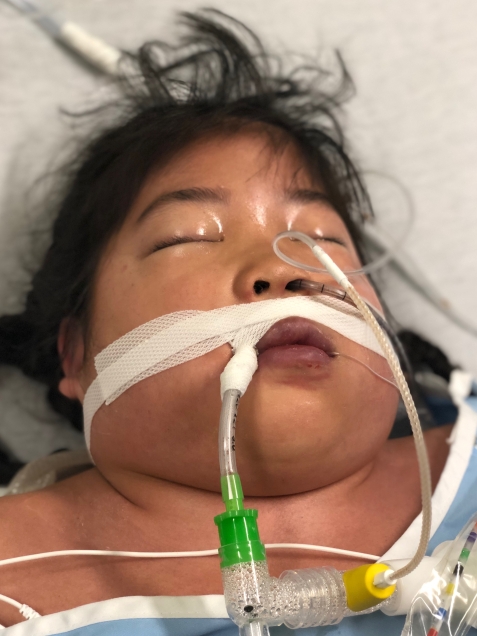 The good piece of news (besides the fact that our baby survived the surgery) is that her spine surgeon said the hardware they put in her back looks great on x-ray. We were very happy to hear this. Also, they did let us see her back, and it looks absolutely beautiful. Her plastic surgeon did an amazing job closing things up, especially under the very urgent circumstances.

She will be heavily sedated, in ICU, and on a ventilator for at least the next couple of days as they try to get (and keep) everything stabilized.They may also have to periodically paralyze her whole body during the night if she continues to have airway issues, but she is so deeply sedated, that we are hoping she will not be traumatized by this at all.

These are some of the things we had really hoped wouldn’t happen, but we knew they could. And now they have. We have worked very hard over the past couple of years to keep Lilyan as healthy as possible by using Juice Plus products and keeping her body moving and exercised. And her blood work proves that she came into this surgery in superb shape nutritionally. Plus, we already know that she is a fighter.

Please continue praying for our girl now as we move through these next scary days. We are praying that her body can rest and do the job of healing itself as the excellent ICU staff watches over her and God holds her.

We have been told that she is nowhere hear out of the woods yet, and we expect to have some tough days ahead now, but she is peaceful and deeply asleep for now and blissfully unaware of all that’s going on around her. She had us put her playlist together specifically in case something like this happened and asked us, before surgery, to please play it for her if she ended up being sedated. So we are doing that now and it will likely play for her all night.

(Also, please ignore any typos. We are very tired)

15 thoughts on “Some Scary Moments”