“A happy home makes gladness. There hearts trust each other. Men who are out in the world all day must be continually on their guard, not knowing whom they may trust; when they come home at nightfall they may lay aside their reserve, for they are with those now who love them. Home is a resting-place for tired hearts. Many of us would never be able day after day to face life, with its struggles, its battles, its duties — were it not for the renewal of strength which we get in our home.” ~ J.R. Miller (1840-1912)

We made it! We survived both flights and arrived safely home. Although we definitely felt like we were trying to hold an armload of loose springs close for most of the day, Nolan did well until we landed in Dayton. For some reason, it took an hour to get our bags from the plane to the baggage carousel, and he had reached his limit by that time. As he moved into a very loud and public scene, though, I was able to finally get his focus enough to help him reverse, and then he managed to just barely keep things together until Scott brought our van to the curb and we got him buckled into his seat. After that, he just moved into a nervous and endless stream of chatter while we drove home. 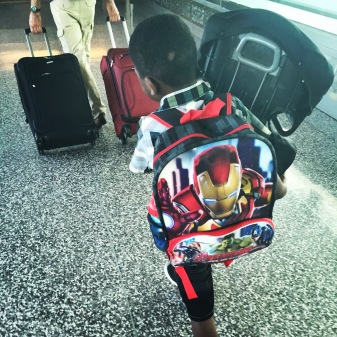 Lion watching Tulsa fall away through the clouds

It was already past the kids’ bedtimes when we arrived home, so we didn’t really know what to expect, especially after the long day that Nolan had already had, but we phoned ahead and told the older kids to keep the little ones up to wait for us. We explained to Nolan that he needed to use a calm, soft voice around Kathryn because sometimes sudden loud noise can upset her. He had already asked many questions about her brain damage, and shown such tender concern for her in all of our conversations. He seemed to process this immediately. As we drove up to our house, he was so excited about the balloons we always put on our porch to welcome home a new little one. And he loved the sign on the front door. Inside, he was awed by the many other hand-drawn pictures hanging on the wall in the entryway for him.

Welcome home balloons for our boy 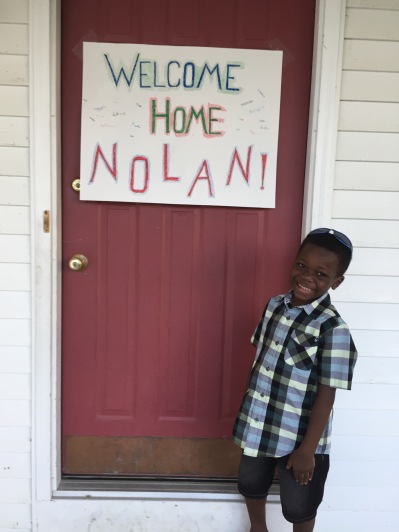 We had warned him that Murray would welcome him . . . ahem . . . . exuberantly. So he was prepared for the huge white fluff ball that came barreling toward us. Although he loved Murray right away, he was a little scared of so much energy. Once we got Murray calmed down, Saxon approached Nolan calmly and lovingly, and Nolan was smitten. The two of them bonded on the spot, and he’s no longer afraid of Murray. 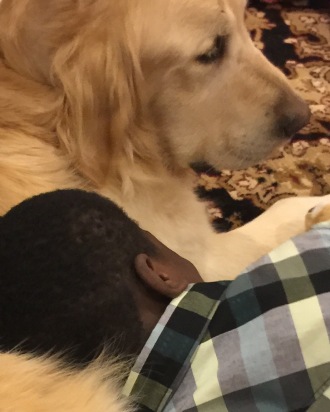 Next, we moved on through the kitchen to the family room where all of the kids were waiting for him. It was one of the most beautiful homecomings we’ve ever experienced. He quietly introduced himself and tried hard to remember each sibling’s name. He had been working all week, using the family photo book we brought to him. He pretty much just glowed through the whole evening, and when Kathryn wanted to sit with him, he smiled and moved over on the couch to make room for her. Once she was in place beside him, he put his treasured Lion in Kathryn’s lap and told her so gently that he had watched a video of her singing, “Let It Go,” while we were in Tulsa. It still brings tears to my eyes to type out this memory. Kathryn was so excited and smiled her huge smile then reached up to touch his hair. She is fascinated by it and wants to “pet” him all the time. He is amazingly tender with her.

Letting Kathryn hold Lion while he snuggles his TSC lamb. He knew all TSC kids got one of these and that there was one of these waiting here at home for him. He couldn’t wait to get it.

And then he also passed his lamb to her

We stayed up way too late, but everyone went happily to bed and slept through the night. After a pancake breakfast this morning, they all played hard outside before the heat got too bad. He loved it so much. Since lunch, they have been playing quiet games and blocks while Scott and I worked on unpacking. In spite of the fact that it was essential that someone watch him closely to keep him under control while we worked, and although there were a few minor pouting moments and a few incidents of bossing others, he has done incredibly well. He really does fit in already. We just can’t plan to do anything else anytime soon, besides trying to oversee his adjustment here. It’s pretty much a full-time job for all of us, but we are feeling so blessed that he is here now, and he gives all the signs of basking in the love that he is feeling. 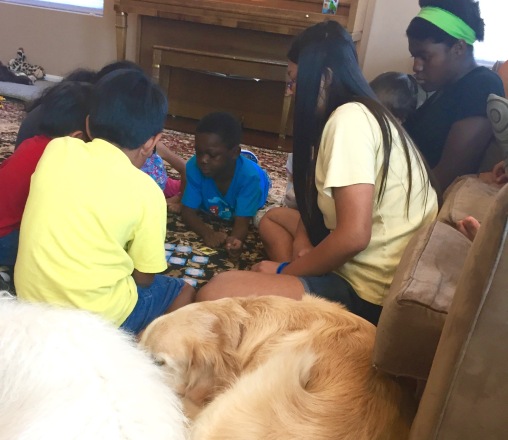 Playing a memory matching game with the other kids

We also all removed our blue arm bands and ribbons that we’ve been wearing until he came home. He actually seemed to grasp at least some of the meaning behind this family tradition. What an amazing thing adoption is! We hope that each of you who prayed, gave, provided meals, helped with child care, etc. know what a huge part you have played in our son’s life. The world of one is changing every minute now because of you.

3 thoughts on “Home, A Resting-Place For Tired Hearts”